Locksmithing: A History Of The Trade

Have you ever wondered where locks, keys, and the trade of locksmithing originated? Perhaps you have been a locksmith for a while, but haven’t looked into the history of locksmithing. With growing technology and near-endless possibilities, locksmithing has certainly been evolving since its inception. This evolution has happened in the last 200 years at a rate faster than at ever before.

Locks, keys, and locksmiths first appeared in Egypt and Babylon 4000-6000 years ago. Although many doors were certainly “locked” with a beam across the inside of the door to keep it closed, the earliest lock artifact found was in ancient Assyria in the ruins near its capital, Nineveh. This lock and key was a very simple device that was inserted through a hole in a door and lifted the internal bar or beam. Throughout ancient Egypt, we have record of wooden devices that came into being with pins (the beginnings of the pin tumbler design) that prevented a door to move. Large wooden keys were fabricated to operate these locks, which could be inserted into the lock, move the pins, and open the door.

Later in history, metal locks appeared in wealthy Roman homes to secure jewelry, coins, precious metal, and valuables in lock boxes. These keys often were worn as rings and had several pins protruding from the face that acted as the key. During this time of Roman history, the warded lock and skeleton key came into being. A warded lock provided some additional security by offering metal barriers that would have to be bypassed in order to gain entry. The warded lock also made a step in lock technology by reducing the size of the lock body itself compared to prior door locks.

Locksmiths during this time were frequently very skilled metal workers, who may have worked on several types of metallurgy, but also were able to construct locks and keys.

With the locks and keys having their beginnings in the Near East, the Far East seemed to develop locks of their own. Some bolt or padlock-type locks can be seen on medieval period doors in Nepal and China that have been preserved for centuries. 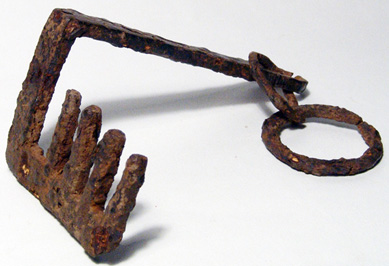 Locks and keys received very minor changes until the European Industrial Revolution. With advancing metallurgy, locksmiths were able to utilize casting methods, stronger internal lock components, and larger production runs of standard keys. Industrial plants were able to create molds for the locks and keys and produce them at a rate never before seen in history. Locksmiths were no longer required to form each lock and key by hand for a growing number of lock types.

It was also during this time that locks and keys were made available to more people that before would not have had access to them. With industry in the minds of engineers during the mid-1800’s, the modern style “flat key” design was introduced. With these new style of keys and pin tumbler locks, along with increased global trade and their ability to be mass produced, these locks  become instant success across the globe. The flat key design and pin tumbler locks were much easier

to produce in a mold, and offered some benefits that hadn’t been utilized before.

Another stride forward came with LAB manufacturing throughout the mid-1900’s. They made this major step in the locksmith industry when they began creating lock pin machines and later created the first universal pinning kit. These lock pins in bottom, top, and master design were mass produced by LAB on custom machinery, but allowed locksmiths to carry a single universal pinning kit to rekey locks, as opposed to hand filing various height

and diameter pins for each lock. Lock manufacturer’s began adapting their lock cylinders to work with the standard diameter pins. For more on LAB, see our article from June 2012 here.

Despite steps of homogenization, locksmiths have struggled and benefited through ups and downs in lock and key technology. Locksmiths at one time were responsible for making their own locks, keys, and safes one piece at a time. The industrial revolution in Europe and America changed this, but opened up new areas of service that were not previously in existence. Had the price of locks never come down and availability gone up, the average consumer would not have had access to locks on their home as we do today, let along their vehicles and businesses. There are a great number of locks in use today, giving locksmiths the most diverse clientele than any previous time in history. The Chinese Industrial Revolution has brought a generous amount of low cost, low quality locks to the third world across Asia, Africa, and South America, and now are seen on homes that have never before been able to have a lock on their doors. Locksmith skills, in turn, are being developed in parts of the world that previously never needed them.

Another major turning point is happening before our eyes. Biometric, transponder, code, Bluetooth, card reader, and cell phone technology is exploding as the next generation of “keys”. Locksmiths may no longer simply deal with wood or metal locks and keys, but with computer hardware and software. The locksmiths of tomorrow will certainly look to our day and age as a turning point in the trade.